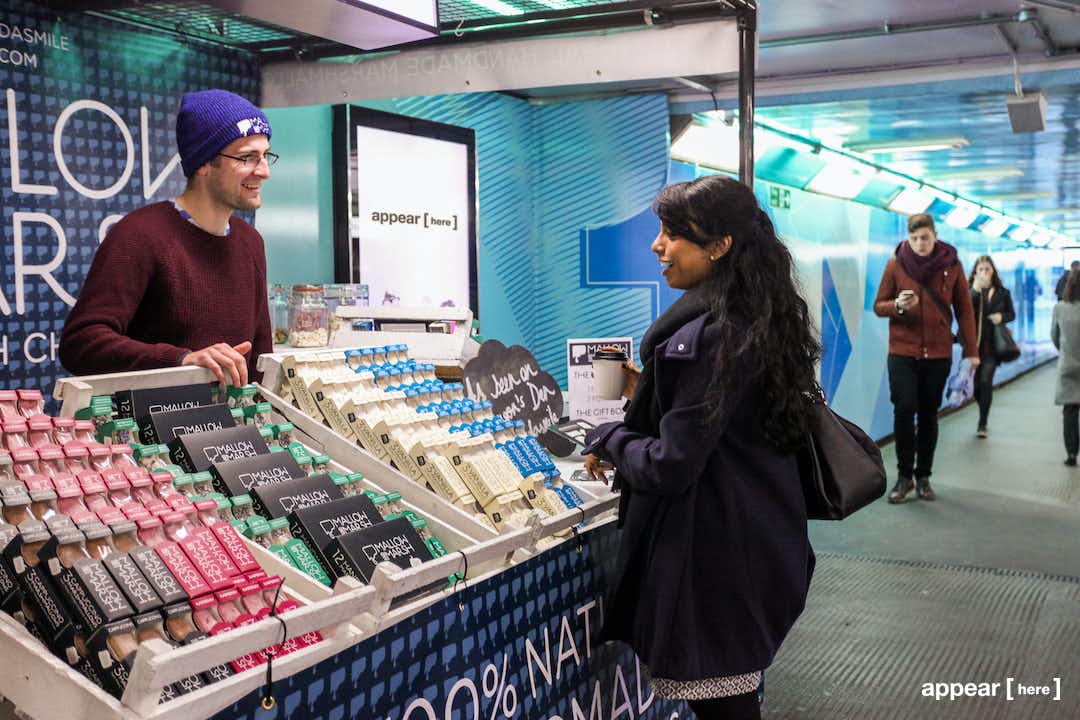 Old Street Station is the world’s first underground station dedicated to innovative retail and immersive brand experience. Right in the middle of the main public atrium of the station are two market stalls, available to rent by the week. The bespoke frames of the stalls measure at 2.6mx2m. Each stall comes with a hanging lightbox for branding, four power sockets and a market stall cover.

Old Street attracts a mixed crowd, from City workers to those working in what Wired magazine calls the “fastest-growing tech cluster” in Europe. Get your brand in front of thousands of commuters a day who otherwise may not have heard about who you are. They’re looking for quick and easy purchases – a good chance to offer commuters a quick pick-me-up or something to help kick-start their day. Peak travel times are between 8-10am and 5-8pm during the working week.

You’re placed by a convenience store and opposite the ticket barriers. Looking for something bigger? View our other retail shop spaces available in Old Street Station here.

Brands have to have public and product liability insurance in place.

There is a refundable key deposit of £100 applicable with this space.

Check-in and check-out occurs on Sundays.

TfL will require RAMS and Method Statements along with visuals and proposed fit outs two weeks before residency for sign off.

The station is a busy environment and new to this style of retail, which means the more exciting and innovative you are the more likely you are to make an impact. Consult with our Concierge team to make the most of appearing underground.

The market stalls for rent are situated on the main thoroughfare of the station, which is open all day and night.

As it's underground, there are some conditions that are outside of the Landlord's control. It's recommended that valuables are not left unattended and that stock is taken away or covered overnight to protect from dust blowing up from the tracks.