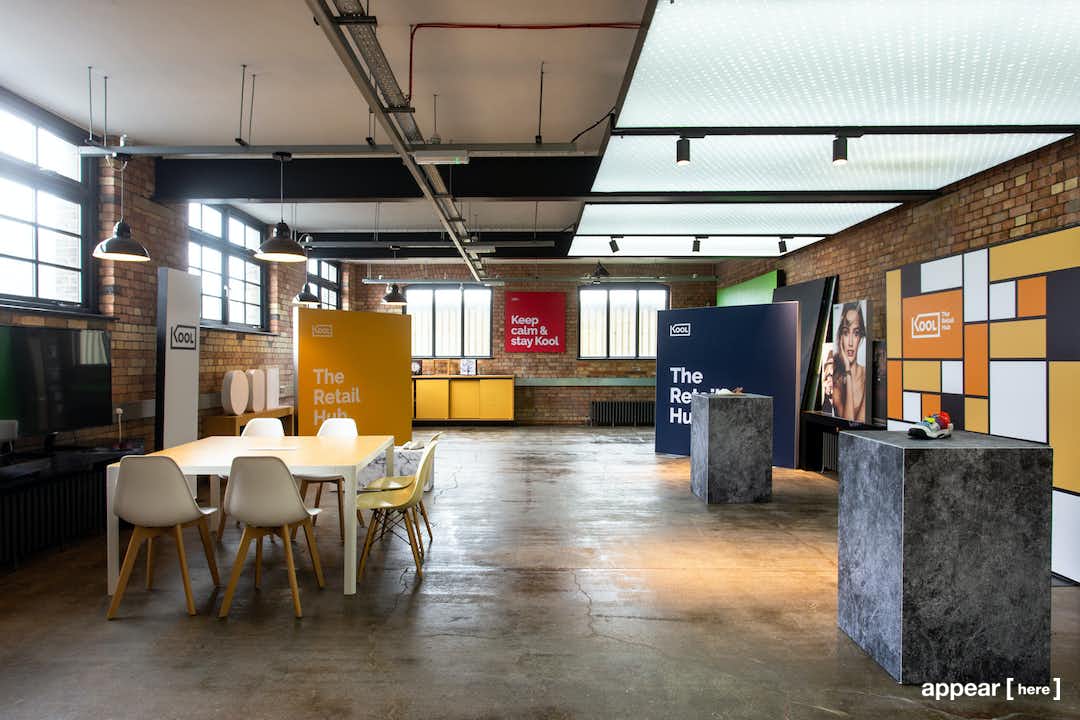 A street-art-scrawled backstreet that’s snug among the converted lofts and industrial tableaux of Hackney Wick, Wallis Road links many of the neighbourhood’s of-the-minute, independent businesses. Craft breweries, canalside bars, and modern restaurants populate this youthful area, as do specialist retailers catering to the fashionable crowds. True to form, this second-storey event space occupies a refurbished, early-20th-century warehouse, just atop one of the city’s most popular beer bars and in proximity to several fashion businesses. The sprawling, industrial location comes with a green screen, and is primed for product launches, photo shoots, media projects, and other interactive offerings.


In recent years, as the formerly industrial area has welcomed a slew of residential developments and independent businesses, Hackney Wick has burnished a reputation for youthful dynamism. During the week, creatives and freelancers hop across the River Lee from the Here East campus in Queen Elizabeth Olympic Park, in search of midday coffees and post-work drinks; shops like Vinyl Pimp, Frankenbike, and Béton Brut antique furniture tempt browsers throughout the day. Hackney Wick is at its busiest on the weekends, when crowds of 20- and 30-somethings seek out pints, pizzas, and street food at Crate Brewery and the Howling Hops Tank Bar; socialise waterside at Number 90 - Bar & Restaurant or Grow; or even stay for underground, late-night raves. Given its proximity to London Stadium (home to West Ham United), Victoria Park, and Westfield Stratford, Hackney Wick also attracts varied visitors, though they’re more likely to stick to the neighbourhood’s main thoroughfares.

Located in a hub that’s also home to small, fashion-centric businesses, this event space is right above Beer Merchants Tap, a buzzing weekend destination for London’s craft beer drinkers (and which offers outdoor seating and street food in the summer months). Down the block is the avant-garde Cornerstone restaurant, which pioneers sustainability in fine dining, while co-working spaces and studios, the Hackney Wick Boulder Project, and waterfront bars round out the rest of this short but varied street. It’s less than five minutes by foot to reach the Hackney Wick Overground station.

As this building is located off the main drag—and because this second-storey space isn’t visible from street level—additional signage on the main road and promotions can help direct visitors to this event and pop-up space.