Neighborhood guides: Live like a local in Amsterdam Noord

From shipping port to creative hub, the Amsterdam Noord – or Buiksloterham, as they say in Dutch – neighborhood has cemented itself as one of the coolest in the capital. However, it wasn’t always this way.

The northern neighborhood was once an obscure area of the city, run-down and sketchy, not somewhere you would want to find yourself after dark. However, after it got its own metro station, it started gaining traction as an innovative destination. Now, decades later, Noord has been transformed into Amsterdam’s edgiest neighbourhood: it’s constantly evolving and there always seems to be a new must-visit spot drawing in crowds from all over the capital to this industrial chic destination.

Here are our favorites.

Café Keppler
Kees Kraakman, the co-founder of Café Keppler, has been working within the world of specialty coffee for nearly two decades. Hence why those in the know head here for their caffeine fix. Calling upon restaurateur Mike Lubben to co-found the space, the two men work in harmony: “He’s the real [hospitality] guy, and I’m the coffee guy,” explains Kraakman. “We share the same vision in how we want to be open for everybody, so really, a neighborhood cafe with quality products.”

Café-restaurant Stork
A former factory that once made engines and kitchen equipment for ships, this waterside industrial space along the river IJ is now home to the Stork seafood restaurant. The designers deftly managed to make this hangar feel cozy with a little help from the soft furnishings, lamps, plants, screens and boat sails suspended from the ceiling. But people don’t come here for the decor – it’s the menu that steals the show.

Hotel de Goudfazant
Named after a 1960s song, Hotel de Goudfazant is actually a restaurant, not somewhere to sleep as the name would suggest. Its neighbor Stork may have softened the industrial vibe, but Goudfazant doesn’t shy away from its factory setting. Here, visitors might find themselves seated on an old office chair, with a retro sports car parked right next to their table – the space was once a garage. Expect delicious French fare with lots of seafood: oysters, crab, monkfish and salt cod are standouts. Oh, and the cheeseboard makes for a great dessert.

Shelter
During the Amsterdam Dance Event back in 2016, Shelter, the club located underneath A’DAM Toren on the northern banks of the river Ij, opened its doors. Before launching, its creators acquired a 24-hour license from the city’s municipality meaning that when Shelter throws a party, you really do not want to miss it.

Pllek
Pllek is another example of the neighbourhood’s upcycling infatuation. The restaurant is built in an old shipping container, however the entire back wall is constructed with elongated windows which give the river IJ and the low horizon of Amsterdam’s skyline its due. The menu spans breakfast to dinner, including a tasty array of vegan, vegetarian and organic options too.

Oedipus Brewing
On the east side of Amsterdam Noord, you’ll find a host of venues popping up. Oedipus Brewing was the first to offer thirsty patrons the opportunity to sample their signature beers at the source.

SkateCafe
SkateCafe’s name sums it up perfectly – here you’ll find a mini skate ramp at the back, and a casual bar and dining area at the front. The large warehouse space is very much in keeping with the Amsterdam Noord vibe: it has unfinished concrete walls adorned with plants. One quirky addition is that all the furniture looks like it’s been taken straight out of the classroom.

Coba Taqueria
For Mexican cuisine and cocktails head to Coba Taqueria. This chic yet laid-back eatery has all the qualities of the typical Noord establishment, yet it serves surprisingly gourmet small plates. Make sure to order the tacos and tostadas. Yum. 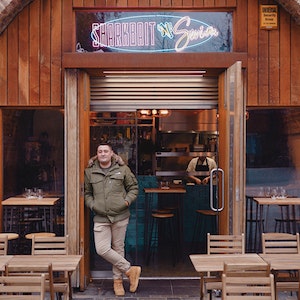 The story of Sharkbait & Swim

Steve McClarty is the chef-owner of Deptford’s latest seafood joint, Sharkbait & Swim. Steve’s story is one for the books. 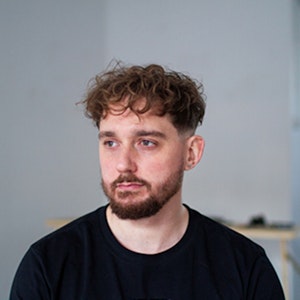 The Five at Five: Simon the Last