From hidden-gems to places to people-watch, from bookshops to beauty spots – here is some inspiration, celebrating the independents in our local neighborhoods around the world.

This week’s selection has been curated by Danielle St James, the founder of ZOAH, the chic yet comfortable underwear brand designed specifically for trans bodies. She is also the founder and chair of the charity organisation, Not A Phase, that supports the lives of trans+ adults across the UK.

Danielle – or Dani – originally began working on her brand back in 2017, however, the timing wasn’t quite right. Back then she didn't know a thing about underwear, but she knew that what she needed did not exist: “Here I find myself, four years on and I finally have the space, the clarity, the time, and the drive to make this happen. Not only because the problem that I wanted to solve back then still exists, but also because I have worn my prototypes every day since, I know my product, it works, and now after years of people asking me where I got my tucking underwear from, I can finally direct them to Zoah.”

FOR FOOD
“I used to work in New York a lot, and when we would be there around Fashion Week we would inevitably always end up at Buddakan. It's famous as being the restaurant with the really long table where Carrie celebrated her engagement in Sex and The City. They do these edamame dumplings that are insane – they come in a little puddle of chicken broth. I’m veggie, but I turn a blind eye for those.”

FOR PEOPLE-WATCHING
“The window seat of Balans, Old Compton Street in Soho... It’s one of the gayest streets in the world, and I absolutely love it there because everyone knows that when they are walking down that street, someone is watching. So it of course becomes a runway: Shantay, I stay.”

FOR BOOKS
“Gay’s The word is an independent queer bookshop that has been serving London for decades — the type of place that we need to support, otherwise Jeff Bezos will turn it into a storage unit.”

FOR WELLNESS
“My god, do I love KITCH... The owners, Scott and Luca, are the warmest, kindest couple and the whole place looks like a pastel 1950s/60s kitchen. They have done my hair for a long time, and I actually modelled in their recent ad campaign. I love going there for a root touch up, a chat, and a cuddle from their resident pooch, Gaston.”

FOR SHOPPING
“I love how absolutely bonkers Tokyo is. Nothing makes sense and nothing needs to. You can be shopping for fruit and veg and all of a sudden be looking at hardcore bondage gear in the same shop.” 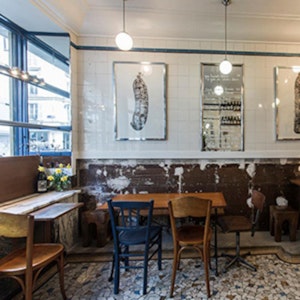 Neighborhood guides: Live like a local in Pigalle, Paris

Cool boutique hotels, hip bars, concept stores, and coffee shops have transformed this pocket of Paris into a destination not to be missed.