Going global: how to build a business empire

Today's brands have more tools available than ever before to grow their business and expand internationally. However, that doesn’t mean it’s an easy job. From unpicking cultural differences to the dangers of growing too fast, when it comes to scaling your business there’s no ‘one size fits all’ solution. And whether you’re a successful business moving into new territories or a start-up that’s expanding, the risks can be high.

Last week, we invited a panel of experts to share their own experiences and advice on scaling a business. Joining the conversation, Luke Scheybeler, co-founder of Rapha and Tracksmith; Julien Callede, co-founder, MADE; and Kelsey Pearson, former Everlane, now ADAY’s Head of Product. Here’s their best advice for brands who want to build an empire.

Think global right from the start

Even if you’re not a global company, it certainly helps to start with the right mindset. So you don’t waste time when the business is ready. This means doing the groundwork early on. Sorting out your IP may seem like an expensive investment right at the start, but it will save you more money and effort in the long run. Luke kicked things off by reminding the audience, “there’s always someone in China buying up your domain name, so they can sell it back when you need it most.”

Brands, like ADAY, whose customers have a global mindset, need to embrace this. When ADAY launched, they opened offices in both New York and London. Kelsey explains, “we always thought globally because our core customer is someone who travels. We identified a new normal and made sure we reflected that in our team. We now speak six native languages. All our infrastructure from payments to IP, to our distribution partners has been done with international expansion in mind. In our first year, we launched New York and London and come January we will be in three more countries.”

MADE also started with global expansion on the agenda. Julien revealed, at their first board meeting their investors were pushing for them to go international. Instead, they held out for three years, while they built their brand, team and company. He explains, “It sounds exciting to be expanding internationally, but when you’re knee deep in the day-to-day crap, it’s actually quite scary to think about dedicating your time to doing something else before everything’s perfect yet.

“International only became an option for us once we decided to stop running after growth and switched our focus to prepare for growth.” For MADE, that meant changing what wasn’t working in both their product and team, and re-doing all of their operations to prepare for a much faster expansion.

However, for small companies the biggest danger is scaling too fast. Luke explains “when you’re a small company one mishap or one wrong order can kill you.” When it came to their brand, Rapha was ready to go global but their global expansion only started when the team was sure they had the business processes in place to manage the increased demand.

Work out the cultural differences that matter

What works in one market, won’t necessarily play out the same in another. When Rapha expanded to the US first, they did so because they saw it as the most culturally similar market to the UK. But that didn’t mean everything was the same. “I got a lot of complaints at the start,” Luke admitted, “mainly on the health and safety side. They’re much stricter in the US about road safety, and we were promoting pictures of riders all in black without helmets.”

However, Luke doesn’t believe that you should change your brand for different cultures. Instead you should find different stories to spin. He uses the example of how in the UK, Rapha played up to its Europeanness, which appealed more to the Brits. In the US, they played up their Britishness, as that was something the US-audience identified with more. “You sometimes need to spin stories in different ways,” he adds.

Kelsey echoed this: “when you start changing your product for different markets, people see right through that. Authenticity is key when you’re a small company and staying true to that is the best way to enter new markets.”

When it came to international expansion, MADE’s biggest issue was the differences in banking culture. “In terms of products, what sells the best is very similar across all countries,” Julien explained, “but the one bit that is very different, is the payment method. And that’s very important for e-commerce companies to understand. There are completely different banking cultures. For instance, Germans hate paying in advance. They want to order online and buy when it reaches their door. In Italy, online conversion is 3x lower than rest of Europe, but when we allowed Italians to reserve items and wire money from their bank account we increased conversion by 20%.”

When Rapha first started their expansion in the US, they chose locations where the cycling culture was at its strongest e.g. Portland, San Francisco and New York. From there, they worked hard to integrate themselves with the local cycling scene; using events and sponsoring grass roots races. Rapha stores have also helped them build local communities. “It’s about providing a place for people to meet and share in a culture, whether that’s during a major sporting event or simply to enjoy a good cup of coffee,” Luke explains.

MADE are also using physical spaces to put down roots in new locations. Their showrooms, which first started in their office in London, have a proved a hugely successful sales generator and community builder for them. MADE now has a showroom in each of their key countries. Their customer surveys have revealed how important they’ve been for building brand loyalty too.

Despite having physical stores in key markets, MADE are only just beginning to put teams on the ground in each country. Julien explains, “It’s already hard to have teams work well together in same office, so it quickly becomes a mess when you put them in different countries. That’s why we started by having all country teams located in our UK office. And it’s only now that we ready to start moving local teams back to their countries.”

Be a good listener

That applies to both customers and co-workers. And it’s not about waiting for feedback to come your way. Julien stresses you need to ask your customers for it because then you can’t avoid it. “All the impactful changes we’ve made have come from our customers answers on the feedback emails we send them,” he adds “our showrooms would never have happened if we hadn’t listened to our customers and found out what they wanted from our service.” By being best at what you do and offering the best service, the panel agreed is also the only way to stand out from competition.

In a fast-paced start-up, listening can also help with co-workers and build a strong team. For Kelsey, this is key at ADAY and shapes their culture. “Work is ultimately where you will spend most of your time,” Kelsey shares, “If you surround yourselves with people with positive attitudes and those with a similar mentality, you'll find balance and ultimately work better.”

The one part of ADAY’s company that they’re happy to take slowly is their hiring process. “We spend six months hiring and hanging out with potential candidates. We’ve found by doing that we save more time in the long run.” Luke echoes this saying that the one thing he wished he listened to when he started out, was to hire people better than him. Look for people who are “young, hungry and focussed and get them to work for you” he finished. With experience in building one of Britain’s most successful sportswear brands, we can only assume he did just that.

Thanks to Away for hosting us and Dirty Bones London for providing the drinks. This event was recorded live at the Underground Session: The Empire, download our podcast to hear it in full. 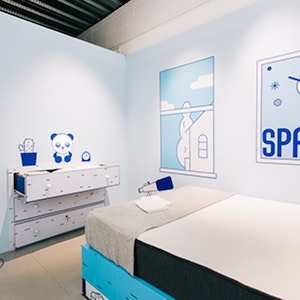 We chat with Philip Krim, Capser’s CEO, to find out how they've achieved their extraordinary growth. 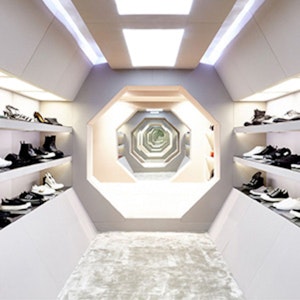 Modern Retail: What can we learn from concept stores

We look at some of our favorite concept stores to find out what they’re doing right.